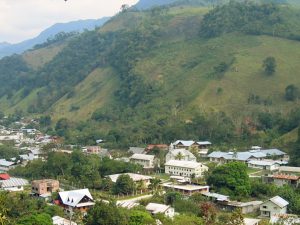 Pozuzo Peru, Departamento Pasco, District of Pozuzo (140.000 square metres, 500-3000 metres above sea level. Principal town of the district at the Rio Huancabamba, on the east side of the Andes, North-Western Peru. As of today the district has a population of approx. 8.000, and 1.200-2000 of them are of German/Austrian descent. Although there has been a road since 1979, many of the settlements can still only be reached on foot or with mules. The village of Pozuzo with its 1000 inhabitants forms the social and economic centre for its surroundings. The population lives almost exclusively on maize, bananas and oranges, coffee, and partly on the cultivation of coca. Tobacco and cattle also form part of the economy.

The geographic isolation adversely affects the regions economical boom. The only route to the next town Oxapampa leads via a 90 kms long unmade road which is often impassable for weeks during the rainy season because of mud and rock slides.