Stronger than the jungle 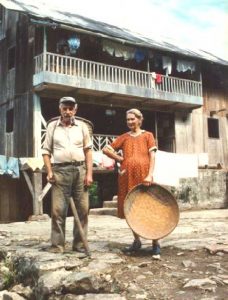 It was the Rhinelanders and Tyrolese who carved out their new homeland in the jungle more than 140 years ago.

On March 16 in the year 1857 300 emigrants (200 Tyrolese and 100 Rhinelanders) boarded the Guano-Sailship “Norton” and set off to the promised land Peru. For more than 2 years the Germans and Tyrolese fought their way through icy cold, storms, rain and tropical heat until 156 of them arrived at their destination on the 26th July 1859, the valley at the Rio Pozuzo.

By hard labour, strength and resistance they created a small paradise deep in the centre of the jungle in the Amazon basin.

As the road construction to Pozuzo was not finished until 1979 the inhabitants of Pozuzo were practically isolated from the outside world. Consequently their dialect, manners and customs are preserved almost as 140 years ago. Until today one can admire their craftsmanship while looking at their wooden houses, rice mills and sugar cane presses.

If you still want to see something of that German speaking island in the jungle, you should endeavour to arrange a visit there as soon as possible. You will not forget this adventurous visit off the beaten track.